Overnight Through Thousand Islands to Waupoos

Deep to the shoreline, Photo by M. Mair

We left our friends waving from the dock in the Iroquois marina. Sailing up the cut the trees displaying their colors reminded us autumn was fast approaching. It was a beautiful day. Out on the river there were lots of small powerboats running around from here to there – wherever those might be. The sun shone. The weather was kind. We had chosen Prescott as our first stop, and found good anchoring outside the town.

We passed a quiet night (except for charging batteries, which as usual meant getting up to change charger plugs and refill the generator with gas when it ran out). In the morning we tried a breakfast cake we had found on our shopping trip while we were in Iroquois, at the grocery store close to the marina. We had been eating our oatmeal most of the trip, and were growing tired of it. Change is good – and so was this. Especially with cheese.

After breakfast we raised the anchor and found our way to the Sandra S. Lawn Harbour to get gas. We didn’t see the gas dock right away, so I radioed to ask for directions. It was well inside the marina, but easy to get to. A little tight for maneuvring, but the young lady there helped ease us away from the dock and we were quickly in and out.

Gas bought we set out for Brockville. It was a motor-sailing kind of day. We used about 25 amps to motor, plus the full main, and were able to sail in shallower areas where the current was less strong. Which got us to Brockville by early afternoon and left us plenty of time to settle into the anchoring spot we had chosen close to Skelton and Mile Islands. The chart said mud, we saw weeds; but the anchor grabbed and held, and that was what we needed.

Along the Waterfront, Photo by R. Mair

The river had been getting deeper as we approached Brockville; in some places it was deep right to the shoreline. We began to see a lot more sailboats – at docks, on moorings, in marinas or on the move. The shore where we anchored was filled with houses and docks; some docks had boats at them, some brightly coloured chairs on them. We saw powerboats and pontoon boats and a houseboat, and that afternoon there were lots of powerboats cruising by. The islands on our other side were rocky and full of trees and bore their names on signs.

We settled in, charged batteries and planned the next part of our course. And watched the sailboats come out to race.

This was our point of departure for the Brockville Narrows. We were looking for sufficient wind from the right direction to get us through easily. The forecast for the next day was for good winds, increasing to strong winds out of the north briefly overnight and moderating again by the next morning. The best winds for leaving on looked to be close to noon, ten to fifteen knots out of the south. 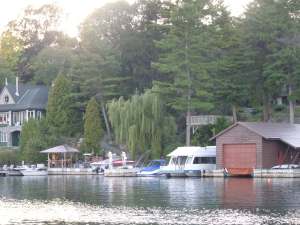 So the next day we left our anchorage about noon. The winds we got were light; when they did pick up we were able to do some slow sailing. Then they died off, and we motor-sailed. We passed islands and more islands – small, larger – and every one that could accommodate a building seemed to have at least one on it.

We started off following the small craft route, then switched to the Canadian Middle Channel to avoid a too-low-for-us bridge. We travelled steadily but more slowly than we’d hoped, and as night was falling we found ourselves through the Narrows but in a place with few good anchorages. So rather than try to anchor in a risky area in the dark we decided to keep going.

It was interesting – in the dusk and darkness we encountered a powerboat travelling fast without lights and later two others hurrying along the channel in the dark. At least they had their lights on. There were unlit buoys that showed as lit on our chart, and buoys not marked on our charts would suddenly appear off our bow. Lights on shore, some of them coloured, made it hard to find the lights on the water we were looking for. Nerve-wracking.

But there we were, threading our way through the Thousand Islands in the dark, watching for those buoys and marks and watching our course on the chartplotter like hawks. We went under the Thousand Islands Bridge in the darkness; our friends had warned us about the swirling currents around it, and they were right. We steered this way and that, working to keep the boat on its course.

As we came through the cut between Grindstone and Leek Islands we ran into some rough water. High winds on the nose were funnelling between them. The boat tossed around, Richard concentrated on steering. Then we were through into the Canadian Middle Channel, and all the way to Kingston the wind was on the beam, the waters relatively calm, the sailing smooth and fast at over six knots. By a little after midnight we were passing Kingston, where we had thought we might stop, and setting our bow for Waupoos.

But there the smooth sailing ended. As soon as we were out of the shelter of the islands (and finally out of the St. Lawrence River into Lake Ontario) we had to deal with waves driven across the lake by the wind. They made our ride very bumpy and wet. This was one night that Richard had no problem staying awake! He was much too busy to fall asleep. I stayed awake too, as leaks inside reasserted themselves. The plaguey new vents we had installed in Halifax leaked mightily, even when closed, and places where we had used a less expensive sealer recommended to us by friends in Halifax decided this would be a good time to let water in.

Now the boat, driven by the wind, was going fast and pounding. Two reefs in the main and the small jib weren’t enough to slow her down – sometimes Richard had to let the main off. Even with the waves slowing us down, we covered fifty miles in a little over nine hours. During those miles the water pounding across the boat moved the dinghy strapped on our bow from its place. We would discover what else it had moved later.

The waves began to diminish as soon as we got to the shelter of Prince Edward Bay, and by the time we dropped anchor in the shelter of Waupoos island the water was wind-ruffled but wave-free. This time we adding drying out to the list of after-anchoring activities. As soon as we had recharged the batteries we used the generator to run our small, oil-filled electric heater. The weather was cool and rainy now, and its heat would keep us comfortable and help us dry out.

We were sheltered from the wind, but it was forecast to change overnight. It wasn’t forecast to be very strong – if the holding was decent there would be nothing to worry about, and in any case we were planning to move across closer to the marina the next day. The holding was not quite good enough. The Bruce anchor dragged during the night. We were tired, so rather than pull the anchor up and set it again Richard moved the boat and we set the plough so that the boat lay between the two anchors. Then, just in case we stood anchor watch for the rest of the night. All remained well.

The next morning we tidied up and moved closer to the marina. It has a breakwater made from tires, low in the water and marked. We chose our spot according to the depths on the chart, further away than we needed to – later we found out that there are places where the depths are deeper than marked. Local knowledge.

That’s when Richard began to put the dinghy together and discovered that when it had moved, one of the seats stored underneath it had moved right off the boat. The middle seat. We had nothing to replace it with (that’s now a job for spring or summer), so now two in the dinghy would now make it a little less balanced than it had been.

The Blue Moose in Waupoos, Photo by M. Mair

Richard went in first, to buy gas (as usual) and check things out. He found the marina much as we had remembered it from the last time we had been here– friendly, laid back and helpful. But he also found that the cafe and the cheese shop we had been looking forward to patronizing were closed, early for the season, because the cool weather had affected business. The Blue Moose lingered under the trees, but the Blue Moose Cafe had not lingered long enough for us to visit. Though Richard did manage to get the last package of cheese from the marina store. 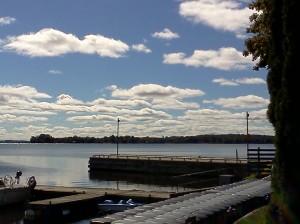 What to do? We decided we would move on by late that afternoon; we needed groceries, and there was no convenient place to get them nearby. We went in to the marina that afternoon to use the showers and do laundry (payment on the honour system), wander around and enjoy the self-guided cannery tour, see what was new since our last visit. The air was clear, the light beautiful, encouraging us to take pictures. If it were not for needing groceries and knowing that the sailing season was rapidly winding down we would have lingered longer.

View through the trees at Waupoos Marina, Photo by M. Mair

Instead we were back on the boat by about three that afternoon, getting her and ourselves ready to sail again. Winds were forecast to be good for sailing on to Cobourg. Would they be? We were going to find out.

In love with the sensuousness of paint, intoxicated by the rhythm of words, entranced by the world of water, ever an observer and explorer.
View all posts by Margaret Mair →
This entry was posted in Ontario and tagged Anchoring, Brockville, cruising, electric sailboat motor, Into The Blue, Prescott, sailing, St. Lawrence River, Thousand Islands, Waupoos. Bookmark the permalink.

2 Responses to Overnight Through Thousand Islands to Waupoos